Melatropin™: The Science of How It Works

Melatropin™ is a highly potent tanning supplement that promotes rapid endogenous melanin production, leading to powerful skin-darkening effects. It is scientifically designed based on years of research and clinical study, engineered to unlock your body’s full tanning potential.

Melatropin™ has been shown to have aesthetic benefits in the skin through several mechanisms of action, including the regulation and inducement of melanogenesis, regulation of MSH receptor activity, and photoprotection against acute and chronic effects of UVR induced skin damage. As a melanin precursor, it supports enhanced natural skin pigmentation in response to UVR exposure by ensuring the availability of key amino acids critical to melanin synthesis. It may also prevent the appearance of premature skin aging by providing protection against oxidative damage caused by exposure to UVR. 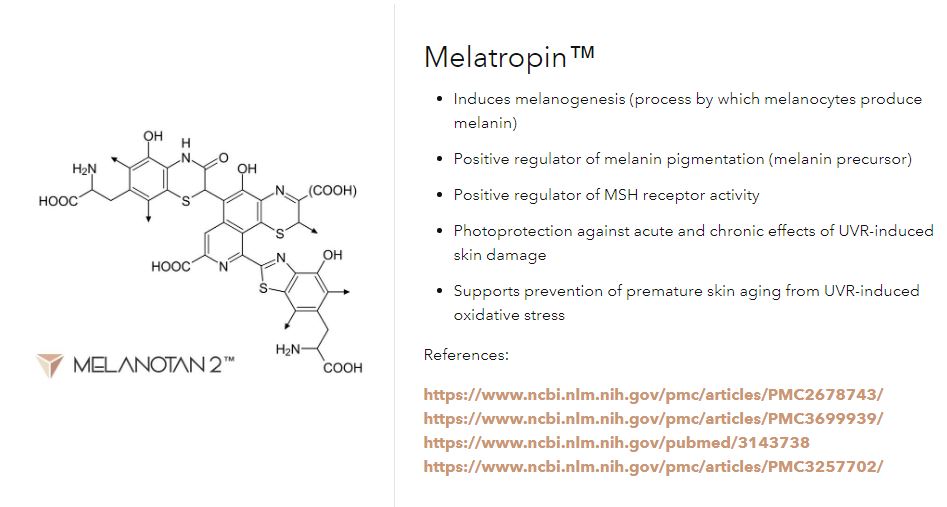 The Role of the MSH Receptor in Skin Tanning

Melanotropins, also referred to as Melanocyte-stimulating hormones (MSHs), react with the melanocortin receptor (MC-R) system to exert a wide and important range of effects in nearly all tissue types. These systemic effects include central and peripheral interaction with other prominent functional peptide-based systems (leptin, gherkin, insulin, etc).

Melanocyte stimulating hormones (MSHs) play a role in skin pigmentation by regulating production of eumelanin pigments from melanocytes as well as in the lipolysis of adipocytes, thermal control, sexual function, and cognition.

In the body, α-MSH is responsible for stimulating melanin production in the skin, a process called melanogenesis, via MC1-R interaction. Melanin is the term for a group of natural pigments found throughout the body. One type of melanin, known as eumelanin, of which there is a black-eumelanin and a brown-eumelanin, is produced by specialized cells known as melanocytes.

Melanogenesis (the formation of melanin via melanocytes) in human skin is initiated due to exposure to UV radiation, causing the skin to turn tan. A tan is the body’s natural defense mechanism against UV radiation by protecting skin cells with increased amounts of melanin. Therefore, the more melanin produced, the darker the skin becomes.

Melatropin™ acts to stimulate melanogenesis, inducing melanocytes to produce more melanin than they otherwise would. As a result, it has profound tanning effects when used in conjunction with UV exposure.

All orders, no matter how big or small, receive FREE shipping anywhere in South Africa!